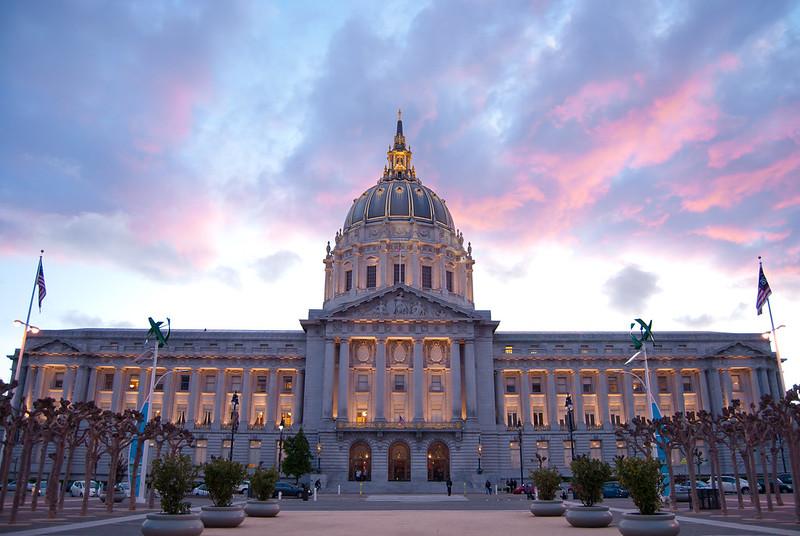 The nearest MUNI and BART station is the Civic Center station. Get help planning your trip by public transportation with the 511 trip planner. For information on getting to City Hall by bus and other MUNI services, call 311.

The main entrance to City Hall is on Dr. Carlton B. Goodlett Place (Polk Street) between McAllister Street and Grove Street. To enter City Hall, you will need to go through security screening, including metal detector and bag screening. If you are carrying any bag larger than 11" x 17" x 7", you must enter through the loading dock on Grove Street. See a list of items and activities prohibited inside of City Hall.

Individuals are strongly recommended, but not required, to wear masks in City Hall regardless of vaccination status.

Bringing a bag into City Hall

Office of the County Clerk

Processing: Mon to Fri, 8am to 4pm

Information only: Mon to Fri, 4 to 5pm

Known as the People’s Palace, San Francisco City Hall is the seat of government for the City and County of San Francisco. It is also a destination historic landmark, frequently visited by tourists and photographers. Themed colored LEDs light up the building at night.

The City Hall Building Management manages the building operations of City Hall, a National Historic Landmark, and is a subsidiary of the Real Estate Division.