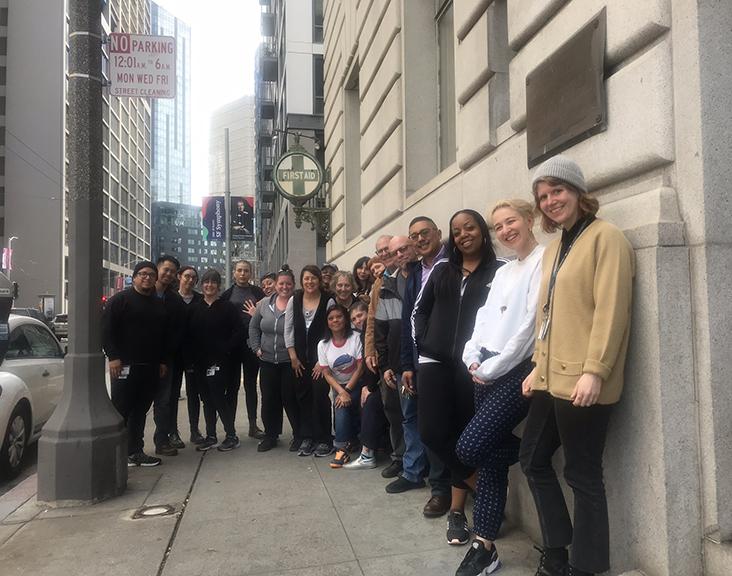 The Street Overdose Response Team provides care, resources, and support to people who experience an overdose. See what we're doing to prevent overdose in our 2022 Overdose Prevention Plan. 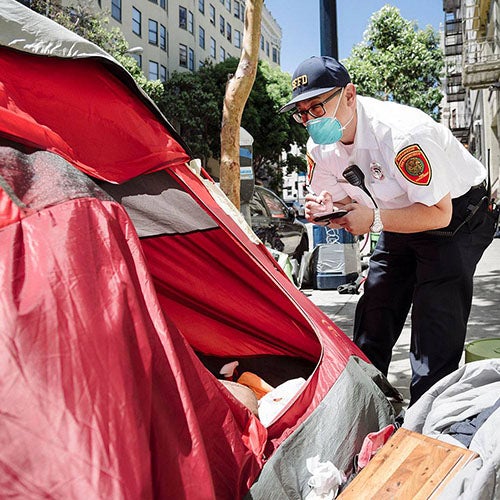 What do we know about overdose deaths?

• San Francisco is experiencing record numbers of drug overdose deaths, in part due to fentanyl

• Homelessness, racism, poverty, and trauma contribute to substance use and overdose risk 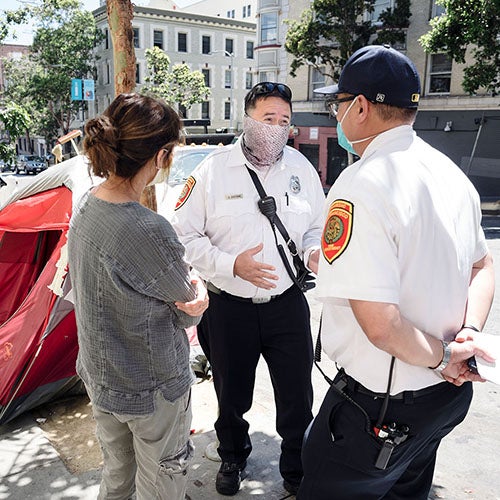 What is the Street Overdose Response Team?

• We respond to people immediately after an overdose, and again within 72-hours, to connect people to care and treatment

• Support may include lifesaving naloxone, treatment medicine, supportive counseling, and guidance getting substance use treatment, housing, or shelter

• The team includes a Community Paramedic, a Street Medicine Clinician and other specialists and peer counselors. They operate citywide, 12 hours per day, 7 days per week. 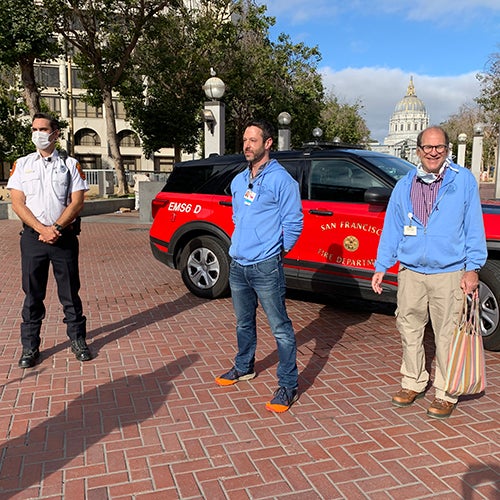 • The team will expand in 2022 to include more teams, expanded staffing, and up to 24/7 coverage

More on accidental overdose in SF

Review accidental overdose reports from the Office of the Medical Examiner.

Center on Substance Use and Health

Creating better health outcomes for all people who use substances

Meeting people where they are at

Ride along with the Street Overdose Response Team

Ride along with SF Fire and the Street Overdose Response Team

Open in another tab

We just heard an overdose go out.

Unknown male OD'ing -- that's all the information we have.

We have an engine with a paramedic,

as well as an ambulance with a paramedic on board, responding.

We're gonna be another additional layer to this response

and kind of try to begin care for this person at the scene.

Fentanyl's been a game-changer.

It's been a game-changer nationwide

and a game-changer here in San Francisco.

and the vast majority of those involve fentanyl.

The first responders and paramedics in the San Francisco

Fire Department respond to literally dozens of overdoses every day.

Community paramedics have the ability to transport folks directly

from the street to a variety of non-emergency services

over approximately a dozen overdoses a day. Those are just the overdoses that we know about

inside of the 911 system. We know that there are many, many more occurring that are never reported.

But the overdoses that this team focuses on

are the ones that are part of the 911 system

and folks that we know about

and can begin influencing their care right away.

30% of overdose deaths are unhoused individuals.

are people of color,

but they represent 25% of overdose deaths

here in the city.

and to watch that just cut down people

And it was a little demoralizing after a while

when you realize there's very little --

We are the "come after the facts," not before.

What was the call? Came in as an OD. Girl from across the street called.

Not really -- I just want to recuperate and a lift...

The streets -- Mission and 6th.

What do you -- What's down there for you?

Well, I can't -- I can't do a transport or a taxi voucher

to a friend's house, but I can give you a taxi voucher

and get you into a shelter today.

I don't want to go to a shelter.

I could see about getting you a ride to the Lincoln Center.

Do you know the Lincoln Center at Market and 7th?

This individual, we believe, was discharged from the hospital within the past 15 minutes.

She's here at a bus stop.

We can tell from our medical records

she's a high utilizer of 911 systems.

We could transport this person directly to shelter

from the street in the context of a 911 call.

But, for a variety of reasons, she's declining.

This initially came out as an overdose.

It's unclear at this time, but either way,

this is a very vulnerable, unhoused individual

who's essentially relying on the 911 system

for their primary care.

are at very, very high risk of future mortality.

So when this team -- this rapid response team --

the data from that encounter is automatically transferred

to our Department of Public Health colleagues,

and their goal is to follow up with these folks

-We are on the outreach van.

in the next two hours -- or at least try to find.

These are all people that have had a non-fatal overdose.

And what our job is, is to follow up with people

in that critical first 24 to 72 hours

after a non-fatal overdose,

when -- where someone's at an even higher risk

-How many overdoses has he had?

-So, he's had a couple, even in the past month.

-So we are basically going to see him

to kind of see what happened

and just kind of do a -- like, debrief about what happened,

to see what he's willing to do

to kind of reduce -- to reduce his risk.

-And where is our patient, he said?

-He said he hasn't been seen in three days.

When our feet hit the ground,

we know exactly what we're meant to do that day,

and we're going to try to change someone's life.

And it could be one, and we could fail, right?

But we're just going to get up and try again.

Starting [buprenorphine] is a great start.

and whatever's going to work for you

that we're supporting you in any way we can.

So today it looks like we looked for six, five.

We were able to make contact with one in facility,

and we have a care plan for him.

Five we were unable to locate and can pick that up on Monday.

Does that sound about right, guys?

Everybody has a right to have someone care about them

or fight for them.

It's super personal. All of this is personal.

Department of Public Health
Fire Department
Back to top